Finding Out I was introduced to the world of childhood cancer in August of 2015 when my 10 year old son, Carter, started throwing up and complaining of having a headache. After 3 ...

I was introduced to the world of childhood cancer in August of 2015 when my 10 year old son, Carter, started 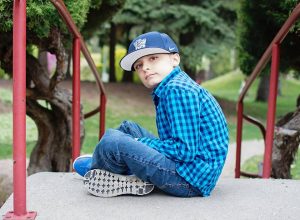 throwing up and complaining of having a headache. After 3 weeks of multiple doctor visits and failed antibiotics, a scan revealed that Carter had a large brain tumor deep inside his brain. I was shocked. A few days later, a biopsy confirmed my worst fears. It was cancer. Although I was shocked and scared, I was still hopeful that everything would be okay. However, a few days later, my hopes were broken when we were told that Carter’s cancer had no cure and he would be very lucky if he lived 5 more years. I felt like this couldn’t be real, how could this possibly be real? My heart was broken, but we were determined to fight and extend his life as much as we could. I thought that maybe if he lived long enough a cure could be found. Just maybe a miracle would happen.

His survival depended on how much of his tumor could be removed and if treatments could cease its growth. So, we quickly scheduled surgery and was presented with a treatment plan from our doctors to do radiation and chemo for the next year. I then had the difficult task to break the news to Carter and our family. I shared news of hope and positive statistics, but kept the truth to myself.

When the surgery day came around it took 7 long hours to remove as much of the tumor as possible. The surgeon came out after the surgery and explained that although he had removed 90% of the tumor, areas of Carter’s brain were affected and cautioned us to be prepared for some weakness on the left side of his body. The word “weakness” didn’t sound so bad when the surgeon was talking with us. However, 30 minutes after the surgery, when we first saw Carter I was devastated to see that he couldn’t move the entire left side of his body except for a few toes. The left side of his face was drooped and he couldn’t speak without drooling. He had even lost half of the vision in his left eye. The room was full of doctors and nurses trying to assess the extent of his paralysis while I tried to process what this meant for Carter’s future. My heart was broken once more; I had already been told my son’s time was limited, and now he would have to spend what time he had left with half of his body paralyzed. Only time would tell if Carter would regain mobility. I prayed more than ever before. I prayed Carter would get better, I prayed for a miracle, and I prayed that he would live. 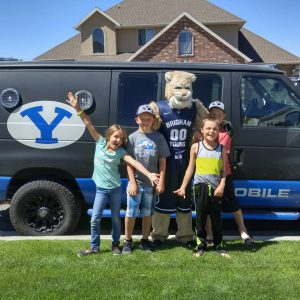 Over the next few months, Carter slowly regained sensation and some movement on his left side. He spent those months admitted to Primary Children’s Hospital doing hours of therapy each day. First, learning to simply lift his arm and leg off the bed, then to speak without drooling, and then turning his head from side to side. Slowly he gained the strength to sit on the edge of the bed, to be helped to the bathroom, and to open and close his hand. He progressed to standing on his own, walking with a cane, moving up and down stairs, and gripping items in his hand. On top of learning all of those things, he was doing radiation  and chemo treatments and experienced many setbacks which included 6 more brain surgeries due to a staph infection. It was difficult, but he made it through.

We started this ordeal in August and by November Carter was stable enough to finally go home. He was able to walk, but with a limp. He was able to move his left hand, but not in a functional way. If we ever left the house, he had to have a wheelchair. He stopped going to school because we had to make daily trips to Salt Lake City for radiation treatments.

After radiation ended, Carter continued treatment with a higher dose of chemo for the next 6 months. This dose was extremely hard for him. It made him very sick and very tired. He threw up on a regular basis and sometimes even 7 times a day. His sense of taste changed and he lost 12 pounds. There were many other bumps in the road like dehydration, a blood clot in his neck, a grand mal seizure, 2 ambulance rides, a helicopter ride, 2 more surgeries, and many more nights in the hospital. Everyday was spent dealing with something cancer related. Carter dealt with being handicapped and unable to be the kid with the life he once had. It was also difficult each day for my husband and I not knowing how much time we would have with our son.

Overall, Carter handled everything with a positive attitude. There were definitely things he didn’t want to do, but he found the courage to do them. He found the good in the situation and expressed gratitude for meeting the wonderful therapist at the hospital whom he had grown to love. He had packages, visitors, and special activities that helped boost his spirits. Our family was loved and lifted as well. There were fundraisers, meals, text messages, phone calls, cards, quilts, prayers, money, gifts for our other kids, gas cards, and people even helped us with building the house we had started before Carter’s diagnosis.

We were used to this life now and were hoping that all this work we were doing was doing its job to get rid of his cancer. The only way to know if the treatments were getting rid of the cancer was with an MRI. It was now May of 2017 and we hadn’t had an MRI in five months. So, we scheduled an MRI to see the progress. Usually, I took Carter to all his appointments alone because my husband, Chad, was working. This time, something inside told me Chad needed to be there, so I brought him along. After the MRI, we went straight to the oncologist to see the results. The oncologist took us in a room separate from Carter and told us the horrible news that the cancer had grown and was rapidly spreading throughout his brain. It had become much more aggressive than she expected and decided to stop treatment because it wasn’t working. I knew this day would come, I just didn’t expect it to come only 9 months after he was diagnosed. I cried and went over options with the doctors that could possibly give him more time. We chose not to do anything more. The options were 4 difficult months with treatment or 3 good months without it, I wanted Carter to have 3 good months.

I shared the news with our family and friends, but only told Carter he was going to take the summer off from chemo to let his body recover. He was thrilled. We made plans for trips and experiences to help him live to the fullest with what time he had left.

Hanging Out With Carter

Our neighbors were amazing and put together what they called the 12 days of summer, leaving packages at our door 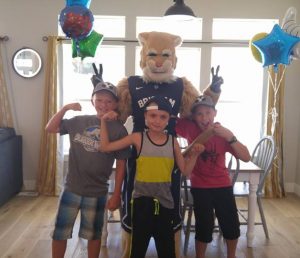 each night. They gave us baseball tickets, nickel arcade passes, board games, water park passes, journals, photography sessions, Tuachann tickets, art projects and more. Carter loved it, and we made a lot of good memories with those.

Alec from the AJU Foundation made a special visit and surprised Carter by bringing his favorite BYU Mascot, Cosmo, and a wonderful gift package full of Legos and other cool things. We said yes to everything Carter wanted to do and everywhere he wanted to eat. After 2 months on hospice, Carter once again complained of a headache and began throwing up. We knew that this was the beginning of the end. I was following other kids online with the same kind of cancer and was preparing myself for him to begin losing his ability to walk, talk, and swallow. It was even expected for him to start having 10 plus seizures a day and weeks of being bedridden.

Praying for a Miracle

I prayed. This time, not for a miracle, not for him to live, but that he would go quickly and not suffer. My prayer was answered. Thankfully, one day of headaches and 2 days of throwing up were the extent of his suffering. At the age of 10 and after 11 months of fighting cancer, Carter passed away peacefully in our arms. After all we had gone through I felt a sense of peace and relief that he didn’t have to suffer anymore.  I had lived everyday with fear and anxiety not knowing what bumps in the road he would face, not knowing how he would deteriorate or suffer, not knowing when the end would come or what it would be like. Would he find out? Would he be scared or angry that we couldn’t save him? Those worries disappeared instantly. Even though I was heartbroken, I felt gratitude knowing things could have been so much worse.

So, here I am 3 months later, learning to live a new life without Carter, missing him more than I imagined was possible and learning to carry this ache around in my heart. There is not a day that goes by that I don’t think about him. There will always be a piece of my puzzle missing.

My heart is still healing, but part of that process includes looking back and recognizing all the good that came our way over the last year. There were moments of anger and frustration with life and with God. But, looking back, most days included someone reaching out to us in some way, and I know that God was there and he used those around us to love and lift us and letting us know that we were not alone.

There are many valuable things I learned from this experience, I want to share a few in hopes that you can benefit from them.

My heart is still healing. But, I have found solace in service and knowing that everything happens for a reason. Carter will never be forgotten.

Alicia Sperry
I am the proud mother of Carter. My family and I live in Utah where we enjoy each other and our time with friends.
Latest posts by Alicia Sperry (see all)