AJU Foundation is a non-profit organization that was created by Alec J. Unsicker to provide individuals and families with ways and means to cope with a diagnosis of cancer. By experience, he knew there were challenges, set backs, feelings of loneliness, discomfort and hopelessness that comes with the diagnosis and treatment of cancer. He hoped to change some of that......at least for a moment. AJU Foundation hopes to provide a smile, perhaps some fun, but definitely and most importantly a feeling of love and support – knowing there are many of us who care. 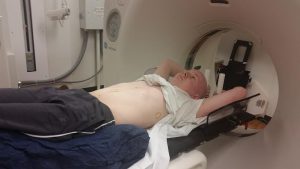 Alec was diagnosed with a brain tumor (a meduloblastoma), May 1, 2009. The doctors removed a golf ball sized tumor from the base of the fourth ventricle on his 11th birthday, May 4, 2009. Subsequently, Alec received aggressive treatment involving chemo and radiation therapy over the next 15 months. Following treatment, a series of MRI's over the next four years suggested the cancer was in remission. On November 17, 2014 (out five years) an MRI revealed that the cancer had recurred at the base of the spine in the region known as the "Cauda Equina." Although it was unexpected and a major set back, Alec was determined to press forward. An aggressive treatment plan was proposed. At the end of another twelve months of chemotherapy an MRI indicated that the treatment had successfully reduced the size of the tumor(s). With that information the Radiation Oncologist felt confident that five weeks of radiation could effectively put Alec's cancer in remission. An MRI on March 26, 2016 revealed that the cancer had spread up Alec's spine in an aggressive manner. Alec's physicians were dismayed and in a state of disbelief. The hope now for a cure would rest on a miracle. 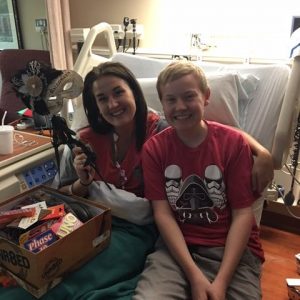 In an effort to cope with his health challenges, Alec wanted to help others who are facing a similar situation. As Alec has been battling his cancer many have, through personal sacrifice of time and resources, put a smile on his face. In an effort to pay back and push forward the love he had felt Alec made the decision to form the AJU Foundation.

"Many times over the years I received anonymous gifts in the mail or on my front porch. I liked these humble gifts and it made me wonder who was so kind. I felt that I needed to treat everyone with kindness because they may be the very person who made that personal sacrifice on my behalf. Now I want to be the person who puts the smile on the face of those who don’t have much to smile about!

People are always asking what they can do for me. I now have something you can do for me. Help me help others by putting a smile on others faces as you have mine!"
- Alec Unsicker

Alec passed away on September 30, 2018. But his memory and foundation still lives on.